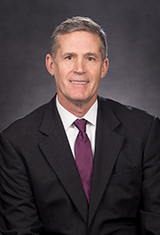 Dr. Reid is a scholar in the field of finance with an extensive record of achievement and service in the military, private sector, and academia. He was most recently dean of Ithaca College School of Business. He has held finance faculty appointments at the University of New Haven, Salisbury University, and Quinnipiac University.

A U.S. Naval Academy graduate, Reid served with distinction until retiring as a Naval Reserve captain in 2017. His active-duty deployments included service in Operations Desert Shield and Desert Storm. He earned seven awards for superior performance during his career as a naval officer.